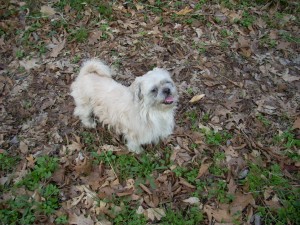 I could see the perfect spot to place a round.  Right behind the left front shoulder of the attacking dog, so the bullet would travel through both lungs and the heart.  It would be a humane way to end the fight in an instant, but something stopped me from taking the shot.

Whenever I find myself in a dire situation, one where hard decisions and decisive action must be made between the ticks of a second, I stop thinking in words.  There is instead a series of images that pop into my mind’s eye, an internal storyboard where I plan out my movements. 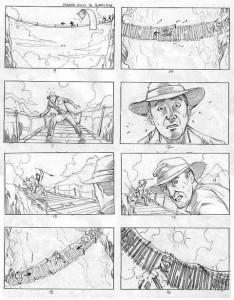 In this case, I could see what it would look like as the sights of my gun came up to align with the chosen impact point, even what it would feel like as the muzzle flip tossed the front of the barrel upwards after the bullet was sent on its way.  But, right at that moment, I also saw something else.

It was how my bullet would rip right through the body of the dog, and punch through the other side with hardly any velocity lost.  I saw it strike the side of a building, drilling through the wall and zipping though the living room of an innocent bystander.  Unless I fired downwards, into the grass, that was all too likely an outcome. 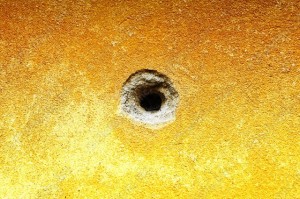 I took a long step forward, my left arm offered as a sacrifice.  My right hand swung my gun forward at the same time, the sights coming to rest on the hindquarters.  Shoot through the hips to drop the beast, then a double tap through the heart or head to end the fight.

My finger was tightening on the trigger when two hands snaked in from outside of my fiercely focused view, snatching at the rear paws of the attacking dog.  It was the owner, and he dragged his pet away.  All of a sudden the fight was over, and I never fired a shot.

How long did all this take?  Probably five seconds, maybe six total.  I doubt it went on for as long as seven.  People who have never been in  situation like this have a hard time grasping how compressed time gets, but that is just the way it is.

Speaking of time, now that it was over it was time to deal with the aftermath.

The picture of my arm was taken by a young woman whose apartment was a few steps from where the fight took place.  When she heard the altercation, she came at the run with her cell phone ready.  She called the police, called the paramedics, called local animal control, and took a picture of my arm so there would be a legal record of the damage.  I am in awe of her calm head and clear thinking. 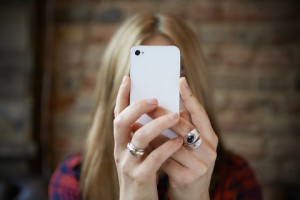 Her husband mentioned that they were thinking of taking the necessary course to apply for their own concealed carry licenses, and I offered to take them on as students for the charity self defense course I run.  It is true that they don’t fit the criteria, not being violent crime victims, but I figure I can bend the rules just this once.

The paramedics wiped down my arm, and strongly urged me to seek emergency medical attention as there were a few deep punctures that might prove problematic.  I looked to my dogs, and found that Fuzzball was spattered with blood but was unharmed.  Chris, however, was bleeding badly.

I locked Fuzzball in the apartment and took Chris to the emergency room at a nearby animal hospital.  The passenger seat of my car suffered some stains even though I had draped a heavy blanket over the cloth upholstery as a precaution.  I waited anxiously with him until the vet took him into the treatment room, and then I managed to tear myself away to find a hospital that catered to patients with no more than two legs.

Bottom line is that I am fine, with the tears and bruises on my arm expected to heal in a few weeks at most.  Chris, however, will be healing for some time.

There are pills I can give him to dull the pain, and they make him want to sleep all the time.  I inflated an air mattress on the floor so he won’t have to climb up on to furniture with his ripped legs, and he spends a great deal of time passed out on the blankets.

Fuzzball has taken to snuggling with him for long hours at a time, awake and watchful. 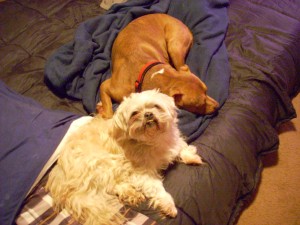 He waits there until the slightest thing is out of place, such as someone walking by the apartment while talking on their phone.  Then he will spring into action!

He will leap to his feet, and face the disturbance head on.  While standing over Chris, he will bark with heartrending fury!

I thought it was endearing the first few times, but now I wish his vocal cords would snap.

31 thoughts on “When The Dog Bites”