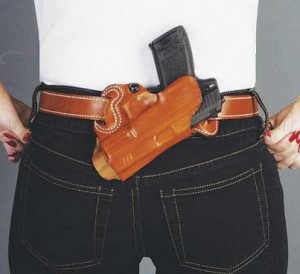 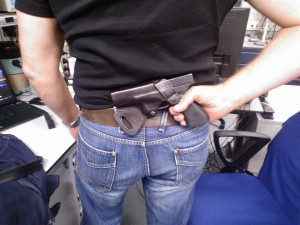 SMALL OF BACK HOLSTERS

There are times when people indicate surprise when I mention that SOB holsters are not for everyone, but those who have this reaction are always young and fit.  I always get thoughtful nods of agreement when the student is obese or elderly. 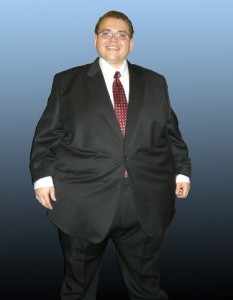 A larger girth means that it is more difficult to reach all areas of the body.  Even if access is still possible, there comes a point where it becomes too difficult to make such a holster choice viable.  One must be able to reach their gun in emergencies, it is true, but it is also important to be able to adjust the holster and make sure the gun is securely seated as well.  If it is an effort to ensure that the gun is still where it is supposed to be, then maybe it would be better to find another part of the body to place your holster.

This problem isn’t confined to overweight people.  Elderly people with arthritis, and even the young who suffered from an injury which caused shoulder and joint damage, can feel some measure of pain and strain without any extra flesh on their frame. 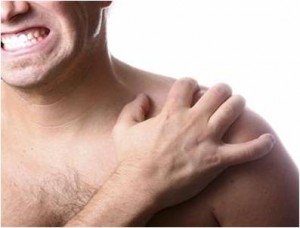 The alternative to SOB holsters is to place the gun at the hip. 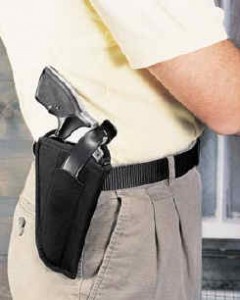 If one needs better concealment, then there are many excellent Inside the Waist Band (IWB) holsters available. 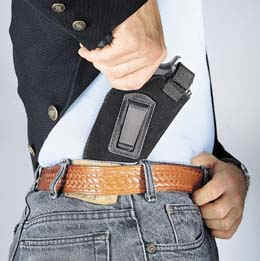 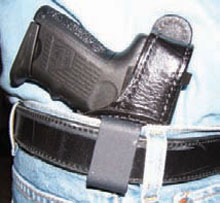 There is one caveat that I must include here, and that is when the student was particularly large.  If their body was somewhat wide, they have a problem if they were carrying at the waist and tried to sit down in a chair equipped with arm rests. 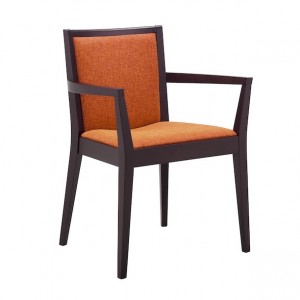 I’ve even had female students who were of average proportions everywhere on their body except the hips, which would be rather pronounced.  They also experienced a problem with their hip-carried holster catching on arm rests. 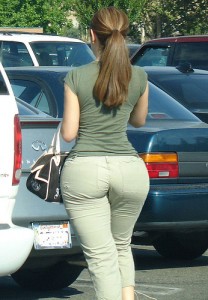 A solution is to pull the IWB holster to the front of the torso.  This is known in some circles as “appendix carry”, and a truly excellent essay discussing the pros and cons can be found here. 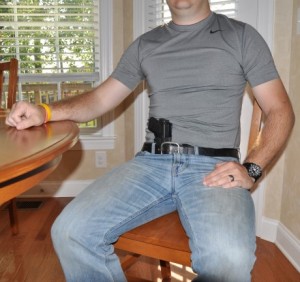 If this is of interest, then I strongly urge you to click on that last link and give the essay a read.  Although written from the viewpoint of someone with average proportions and flexibility, the information presented is also relevant to those with reduced physical options.

Anyway, on to the next method of concealed carry.

I usually get some strange looks when I suggest to my students that they explore carrying their defensive handguns down near their feet. 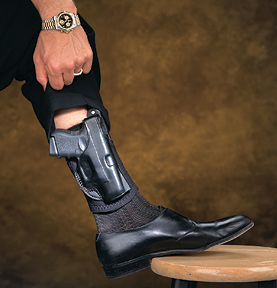 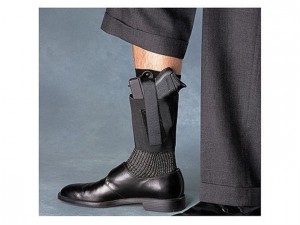 I’m not sure why this should be.  So far as concealment is concerned, ankle holsters cannot be beat!  After all, no one has much interest in your feet unless they have a fetish of a certain kind. 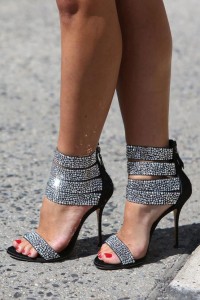 I have carried defensive handguns of various descriptions like this myself, and I can attest that it is a secure way to be armed with no one the wiser.

One student of mine claimed that he would carry a small autoloader in summer while wearing shorts, using long socks bunched down at the ankle to cover the holster and break up the outline of the firearm.  I cannot recommend this method myself since shame of my hairy legs has kept me from donning shorts in order to try it out, but my student swore that it was the best way he ever found to carry a defensive arm in a casual setting.

The biggest problem with ankle holsters is that quick draws are rather problematic.  One has to go to one knee to access the gun, much in the same way that one has to go to ground in order to tie a shoe. 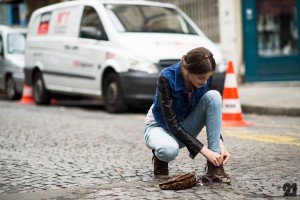 The disadvantage is that one is anchored in place while pulling the gun from concealment.  But there are also two advantages.

The first is that dropping into a crouch reduces the silhouette, making the body a smaller target for the violent criminal.  The second is that one can use their forward knee as partial cover for their vital organs.

One way to make it easier to draw from the ankle is to find a raised surface and use that as a foot rest. 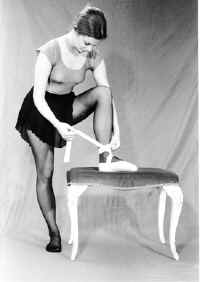 This might reduce stress on the back and tailbone while drawing the gun, but it also does away with the two advantage discussed above while retaining the disadvantage.  One is still anchored in place while the defensive arm is drawn, but the body is just as large a target as ever while the vital organs are left uncovered.

This discussion of the pros and cons of ankle holsters is not useful to those with reduced physical mobility, however.  This type of holster is simply not suitable for them.  When it comes to those who are obese, it can be a struggle to even reach their ankles.

This isn’t exclusive to the overweight, as the elderly also have problems when they get down low.

The bottom line is that they can go to the ground like champions, but they generally have to stay there.

The solution?  Pretty much everyone should stay away from ankle holsters unless they are fit and active.

Great stuff, shoulder holsters.  Useful for just about everyone.

But there are a few exceptions.

I have had a number of female students that were exceptionally curvy. 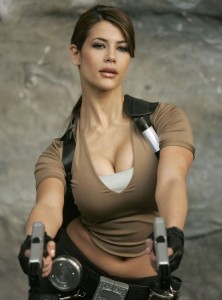 The problem arises when carrying at the hip.  The curve tends to cause the muzzle to be pushed out towards the horizon line, while the butt is pulled in towards the body.  Besides the fact that this means the gun is pointing a few feet to the side instead of straight down at the ground, the woman with this unfortunate body shape is constantly bruising her ribs with her gun every time she sits down.  And remember the problem with how guns carried at a pronounced waist tend to jam in the arms of chairs?

Appendix carry isn’t usually a viable solution in cases like these, also because of the curve of the hip.  If the student had average mobility of their arms, carrying in the small of the back with a holster that holds the gun in a sideways orientation usually worked.

If their arms did not have average freedom of movement, I would then reluctantly suggest a shoulder holster.

Why reluctantly?  Mainly because the majority of shoulder holsters allow the gun a fair degree of movement.  This can result in bruised breasts and banged up ribs as the gun slaps around in all that open space caused by a narrow waist.

The solution in the majority of these cases are what is now called “tactical shoulder holsters”, which is nothing more than a shoulder holster designed to anchor the gun as securely as possible.  Back when I started the charity self defense course, this was simply shoulder holsters with little loops so the belt could be used to keep the gun from moving around so much.  They were called “suspender holsters”. 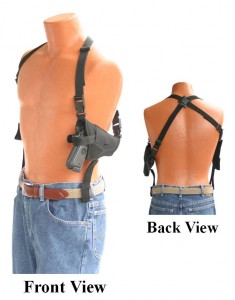 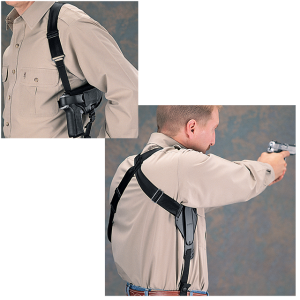 In recent years, holsters designed to secure the gun very securely have been offered to the general public. Clearly influenced by military gear, they do a great job of keeping everything where it is supposed to be. 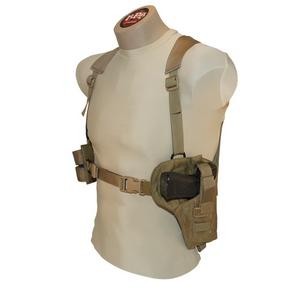 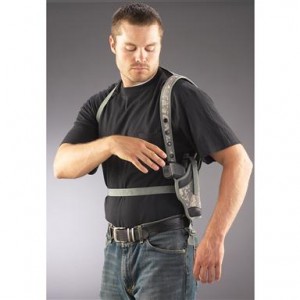 That strap running across the chest can be problematic if one is determined to carry concealed.  One of my students was a fairly skilled seamstress, and she cut slits into the sides of all her blouses and secured them with velcro strips.  The gun would ride on the outside of the shirt, covered by a short jacket, and the straps would be hidden underneath.

Anyway, just a few short observations from a quarter century of trying to find defensive solutions for people of all shapes.  One thing my experience has taught me, however, is that there is an amazing amount of variation in human beings.  Sometimes one has to think outside of the box when faced with pronounced features.