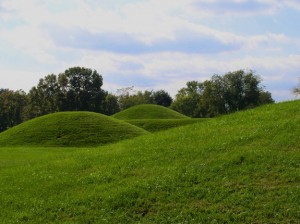 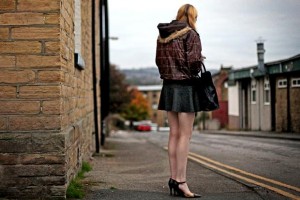 Detective shows and novels like to discuss a criminal’s modus operandi, or method of operation.  Seems that committing a crime is usually a rather stressful time, so the criminal tends to lean on old familiar ways.  If they get away with the crime, they usually find comfort in routine.  The specific methods used can give an insight into who is doing the deed.

Didn’t happen this time, though.  One body was dumped in the Scioto River, which runs through the town.  Another was placed in Paint Creek, a smaller waterway nearby.  A third was found in a drainage ditch, and the fourth was discovered in a shallow grave.

Same man?  Maybe.  Police didn’t think so, mainly because of the differing methods of disposal.  But the number of bodies piling up meant someone had a taste for such a hobby.

The police actually had a point, as it is extremely rare to come across a single person who varied their routine so much.  If it was a single perp, then he must be both rather intelligent and experienced.

The local cops were forced into action when a big city newspaper in Columbus got wind of the story.  With public scrutiny ramping up, they started an outreach program for the local working girls.  Cops on patrol started to drop by where the prostitutes hung around, which couldn’t have been good for business, and they also started to get the street walkers to start memorizing license plate numbers and descriptions of clients.  Seemed to have worked, as the bodies of dead sex workers stopped popping up.

All that came to a head when police announced that they had caught the bad guy.  Well, sort of.

Seems a guy named Neal Falls was shot by his own gun in West Virginia while trying to choke another prostitute into unconsciousness.  The police found some interesting items when they searched the dead man’s car. 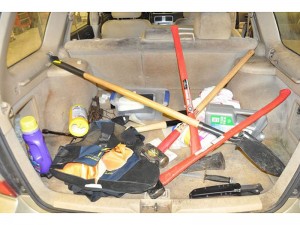 Looks kind of messy, doesn’t it?  Well, the cops tidied everything up for the news conference. 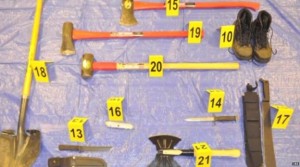 Missing from this pic is the roll of industrial trash bags found, as well as bleach and other cleaning solutions.  Hey, if this Falls guy was such a cleanliness freak, why are his boots so muddy?

Okay, so it is a rather illuminating collection of tools he has tucked away in his car.  What did Falls have on him when he went to meet the prostitute? 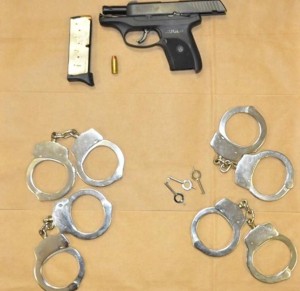 He didn’t have any money on him to pay her for her services, so I doubt he was a stand up guy who just had a sweet tooth for bondage games.

The gun is a Ruger LC9S, which means it is a small and lightweight gun chambered for the 9mm Parabellum cartridge, and it is specifically designed for concealed carry.  Not a bad choice for self defense.  Certainly did a number on an alleged serial killer, after all. 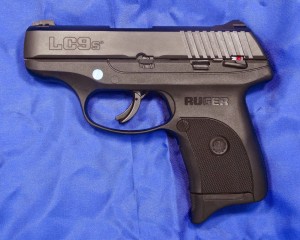 So how did the prostitute manage to turn the tables on her attacker?  Seems she grabbed a rake in order to defend herself during the choking phase of the assault, and Falls dropped his gun in order to wrestle the garden tool from his victim.  The woman looked at this as an offer to trade, so she snatched up the handgun and fired a single shot.

The FBI is working to gather evidence from the corpse and car in order to see if there is any link.  My own experience is that the crime labs always have a waiting list, and there is certainly no hurry now that the suspect decided to try and stop a bullet with his forehead.  It looks like it will be some time before anything definitive is heard from the Feds.