I have long said that I prefer autoloaders to revolvers when choosing self defense tools.  The main reason is ease of reloading an autoloader over a revolver, and the fact that most wheel guns hold less to begin with.

My main carry gun for the past 15 years has been a Taurus Millennium Pro chambered in 9mm Parabelum.

A polymer frame design which boasts a 10-round magazine.  I’d always carry an extra magazine, belted against the opposite hip from where the gun would ride.

The handgun has seen some use, as I would use it in my charity self defense course.  Was it finally showing some wear after a decade and a half?  Nothing really noticeable could be seen on the outside, but I started to have trouble when reassembling all of the parts after cleaning. 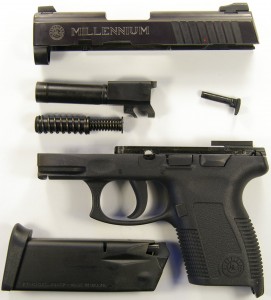 Everything had to be lined up juuuust right, or else the slide would scrape to a stop about halfway through the cycle process.  It was a real pain to get everything pulled apart so I could try again.

What was wrong?  Beats me.  My guess is that some small protrusion on the polymer frame had been worn down a little bit over the years, just enough so it was tricky to get all the parts lined up correctly, but I really can’t say.

Does this mean the gun was completely unreliable?  No, as it would function flawlessly just as long as I got everything in place.  Taurus has a lifetime no-questions-asked repair warranty, so I just went ahead and sent it in and let them take care of the problem.  It came back and seemed fine.

But we are talking about my primary self defense tool!   Even though it seemed to be working just fine and dandy, and even though it had always worked as soon as it was successfully assembled, my confidence was gone.  I started to have nightmares about the gun failing to cycle as the hordes closed in!

Okay, time to retire this old warhorse and go to something else.  But what, exactly?

I’ll discuss what I decided to do in the next post.

7 thoughts on “All Things Must Pass”