I was reading this essay about Aragorn’s claim to the throne of Gondor.  (Hat tip to Sarah at Glenn’s.)

What is that?  You don’t know what or who Aragorn or Gondor is or are?  The two names come from the Lord of the Rings books, and you should probably just ignore the reference if you aren’t interested in really involved high fantasy novels.  After all, discussing whether or not a fictional character is entitled to rule other fictional people smacks of way too much inside baseball.

Still, I am hardly immune to such discussions myself.  In fact, one such geekout occurred way back in 2002 when I went to see The Two Towers, the second movie in the Lord of the Rings film trilogy.  I made the mistake of bringing along Ralph, a buddy of mine who is blessed with an extremely active imagination.  This means that he is rarely bored like the rest of us, but it also means he has never come across a work of fiction where he could resist putting himself in the middle of the action.  This was no exception.

A little background.  See, some Viking dudes who ride horses had a vast enemy army bearing down on them, so they bunkered up in an ancient fort. 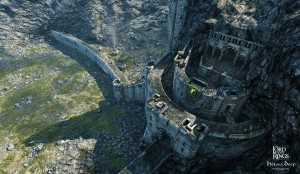 Up on the wall were the good guys, hugely outnumbered and looking worried.

Down in the plain below the walls were these guys. 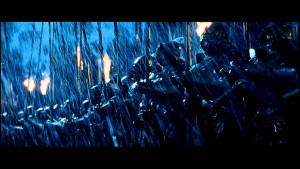 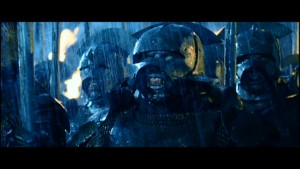 Things went along well enough for me so far as the cinema experience is concerned, but then the defenders decide to thin out the invading army via some bow-and-arrow work. 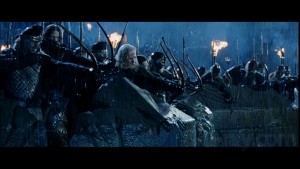 That is when Ralph leaned over and started to voice his opinion as to what the guys on the wall were doing wrong.

“They’re doing it wrong.” Ralph confidently said.  I turned to look at him.

“They’re screwing it up.”  He pointed up at the action on the screen.  “They are higher up than the bad guys.  If they miss, they just end up shooting dirt.  They should be out in front of the wall, so their fire is at an angle.  If they miss the guy they’re aiming at, the arrow has a good chance of taking out someone in the rank behind the target.”

I started at Ralph for a moment whole he grinned back at me, confident that he had scored a major point.  It was a movie, sure, but I found myself drawn into the debate.

“The defenders are using arrows, Ralph!” I said.  “The enemy is wearing armor.  Wouldn’t the elevation add force to their shots as the arrows fell?”

Just then a feeble and elderly guy on the wall shot a big, brawny Orc through the neck, killing the mighty warrior instantly.

He was silent for a moment, but then returned to the concept like a dog to his favorite digging spot.

“The thing is, I wouldn’t be using arrows.” He said.  “I think a fifty caliber would do the trick.  Probably a dual mount.” 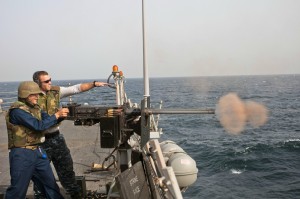 “Nah, I’d be down at the base.” Ralph musingly replied.  “I wouldn’t bother to aim, just chew up the front of their formations.  But I’d have ropes attached to me and the gun, so the good guys could haul me up if the bad guys got too close.”

“What about return fire?” I asked.  “The bad guys have crossbows.”

“Do you know the range on a Ma Deuce?” Ralph asked incredulously.  “They’d never get that close!  But if they did, I’d make sure to have a gun shield.” 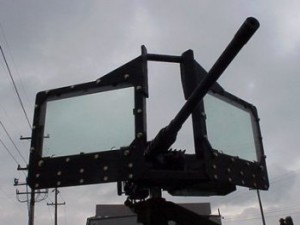 “Should work pretty well.” Ralph said.  “So, what would you do?”

“Mortars behind the wall.” I said. 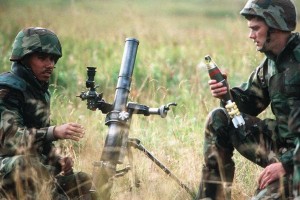 “I’d want to stay away from the smaller stuff, use some more hefty mortars.” I said. 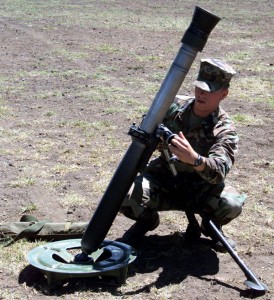 “It would have the advantage of being useful when the good guys start to besiege the castles and forts used by the bad guys.  Not only would one be able to clear the walls of defenders, but they could also drop a few rounds in the courtyards and staging areas to make life uncomfortable.  One last point is that the big mortars have about three times the range of the fifty-cal.”

Fascinating discussion, right?  Apparently the other movie patrons did not have the same enthusiasms, as we were told to “Shut the freak up!”, except they didn’t use the word “freak”.

So we tabled the subject for another day.

12 thoughts on “Geek Is As Geek Does”