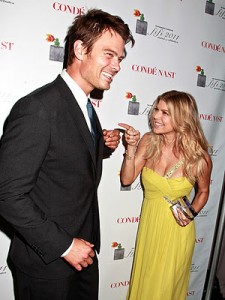 END_OF_DOCUMENT_TOKEN_TO_BE_REPLACED

This news article from two weeks ago reveals the details of a brutal attempt at rape.

A female US Navy sailor was on 24 hour leave in Dubai, and decided to go shopping.  She boarded an otherwise empty bus to get back to base, but the driver instead parked the vehicle and attempted to rape her at knifepoint. 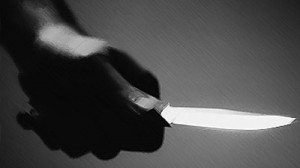 This was probably the worst mistake he has ever made in his life, as the erstwhile victim disarmed him before beating the accused almost to death!  She snapped the blade of the knife, bit her attacker, and went all out to defend herself.  Sounds like a real knock down, drag out kind of brawl.

What ended the fight?  She got his head in a leg lock. Wouldn’t surprise me if the bus driver blacked out. 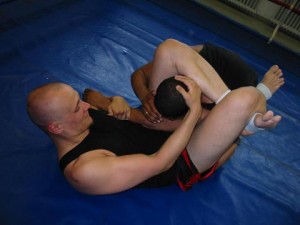 Afterwards, the victim walked out of the bus and contacted police.  The accused was arrested at his home, drunk.  Since Dubai law is largely based on Islamic religious teachings, his consumption of alcohol was a crime.  He has admitted to that offense, at least, but has also made it the cornerstone of his defense against the charges of attempted rape and assault.  He says that he was too drunk to remember anything that happened on that fateful afternoon.

This story dovetails nicely with my own observations, as well as research that has been conducted on the subject.  As this report from the National Institute of Justice details, resistance to a rape reduces the chances that the crime will be successful by 80%.  Give in and it will happen, fight back and you have a four-in-five chance the rapist will break off his attack and scurry for the hills.

A quote from the article last linked ….

“A separate study found that even when a rape was completed, women who used some form of resistance had better mental health outcomes than those who did not resist.”

That is also consistent with what I have observed amongst my own students.

In the spirit of full disclosure, there are those who insist that compliance is the only way to avoid injury.  This paper from doctors working at the Centers for Disease Control has been cited since it first gained attention in 1990.  Their conclusions are that the chances of receiving some injury by resisting forcible rape approaches 100%, which is true on the surface.  What is not revealed until you purchase the article and dig down through a whole bunch of obscure jargon is that they are counting any physical injury at all, no matter how minor.

So a person assaulted by a rapist manages to fight off their attacker, but they received a few scratches or a black eye for their trouble?  Good enough for the authors of the study  to include the results in the GOT INJURED category!

This isn’t to say that no one is ever seriously hurt when going toe-to-toe with a rapist, particularly if the criminal is armed with a weapon such as a knife or gun.  But I would love to see some sort of leveling scale applied to this.  After all, sexual assault is a crime that screws up the self esteem and mental health of virtually every victim.  I think it is worth a few bruises to keep it from happening.

One of the sources that counsels potential rape victims to simply lie back and submit to the crime is the US Air Force.  Seems that the head of the Air Force’s sexual assault prevention and response branch has been accused of sexually assaulting a woman in a parking lot.

Lucky thing that she didn’t heed such advice, and fought back.  While it seems that at least sexual assault occurred, rape was prevented.

Long time reader USN was kind enough to send me a link to this article on PoliceOne.com.  It concerns an incident where a police officer was confronted by a criminal determined to kill any cop he came across.  Even though the suspect was riddled with fourteen .45 ACP rounds, six of which would have been fatal, the perp kept fighting until suffering a head shot.

Please note that the officer decided to switch from a .45 to a 9mm handgun, in order to have more rounds available the next time something like this happened to him.  It seems he came to the conclusion that shot placement is most important, and he wants more chances to put a round where it would do the most good.

The number of rounds someone has available for defense has always been of great concern to those who actually do have to defend themselves.  Back when single-shot handguns were pretty much all that was available, most people carried two in order to have another chance at life if the first missed. 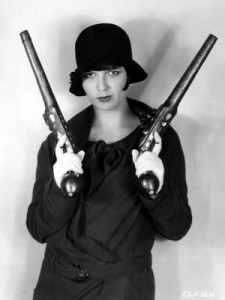 (Click on all pictures to see the largest versions.) 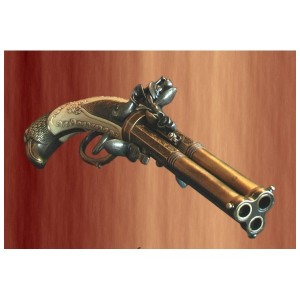 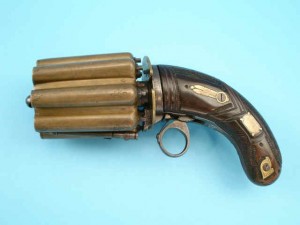 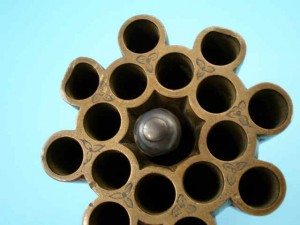 Pepperbox handguns were a solution, but a seriously flawed solution.  All those barrels increased the weight of the gun to the point that it was almost impossible to carry concealed if the gun was chambered for a serious self defense caliber.  If the gun was chambered for a small and underpowered caliber you might have plenty of shots, and the gun was small and light enough to carry around wherever you might travel, but it wasn’t going to do you much good if you fired them all into a criminal attacker only to see them keep coming without being able to inflict a disabling wound.

END_OF_DOCUMENT_TOKEN_TO_BE_REPLACED 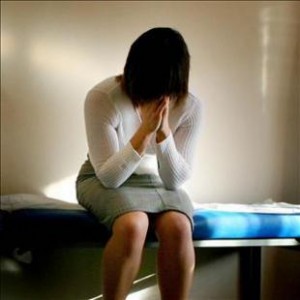