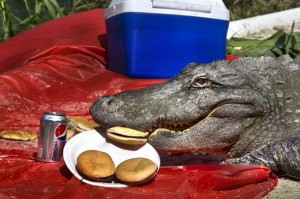 He went with diet soda because he was gaining too much weight.  It always goes straight to the tail, you know. 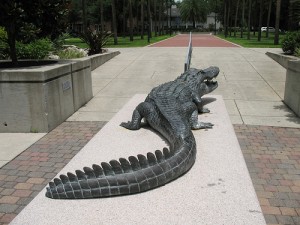 What do you do when your significant other says it is over?

Some of us eat ice cream while wallowing in depression. 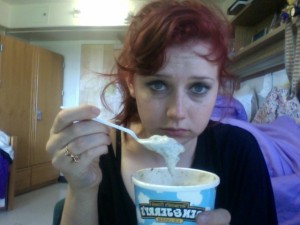 Some of us drink a beer or two while wallowing in depression. 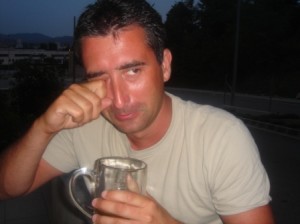 Apparently, some of us also get so drunk that they flash some forbidden flesh at police officers while screaming for the cops to ravish them.

(Sorry, I don’t have a picture for that.  Which is probably all for the best!)

Please be advised that clicking that last link will lead to the news article, but the article also has some video imbedded in the page that is most assuredly Not Safe For Work!  You have been warned.

It seems that a previously respected lawyer was so despondent over the news that her boyfriend broke up with her that she went on a booze-fueled rampage.  When police were summoned, the rampage took a bawdier turn.

The woman at the heart of the incident is afraid that her reputation will be besmirched when news gets around of how she exposed herself to Johnny Law in public.  Gee, ya think?

She has since sobered up, and is trying to put a philosophical spin on things.

“Everybody has something like this happened to them,” the lawyer reasoned, …

This news report details the arrest of a man who is such a racist that has tattooed a declaration to murder white people on his face. 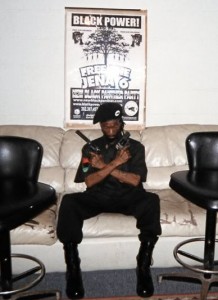 Hardly a poster boy for understanding and restraint.

The charges on which the racist were arrested are interesting to me.  Police justify the initial arrest because the suspect was wearing a bullet proof vest, something that is apparently illegal in New York.  I had no idea that simply walking around in ballistic armor was a crime!

While searching the suspect after the cuffs went on, they found an unlicensed and loaded firearm in his pocket.  Now that I was fully aware as being illegal in New York!

Any way you look at it, the suspect probably should have thought things through a bit more thoroughly before visiting the Big Apple.  Even so, I bet a great many supporters will come out of the woodwork and claim that the charges against the racist are nothing more than a witch hunt undertaken by racist police officers.

Why, it is racists all the way down!

BBC News reports that a burglar in New Zealand made a gruesome discovery while doing some breaking-and-entering.  It was the body of the legal resident, dead by hanging. 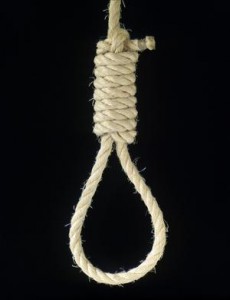 The burglar was so shaken that he turned himself in, and the police started the process to deal with the apparent suicide.

The victim had been dead but a few hours when discovered by the intruder, and police say that the body could possibly have remained undisturbed for days.  I am sure that everyone who has to be present at the scene is very glad the criminal chose that particular residence to ransack, except for the burglar. 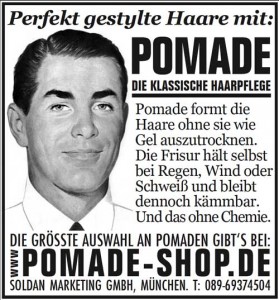 From a website that specializes in retro hair styling.

How do you attach a telescopic sight to a rifle?  You have to firmly (firmly!) clamp it on to the weapon. 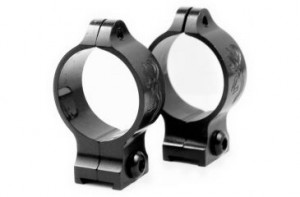 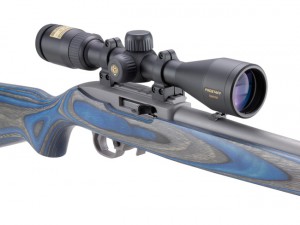 After tightening it down, you then have to carefully adjust the scope until the bullet strikes where the crosshairs meet. 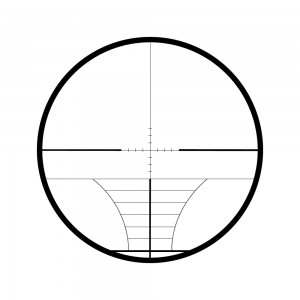 The reason why I emphasized how tightly the scope has to be clamped down is because it is a precision instrument.  Any movement of the scope, any slight misalignment of the rings or the sight itself, and the bullet will no longer strike where you expect it.

Red dot sights are very similar.  First the sight has to be firmly attached to the weapon. 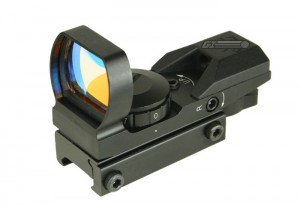 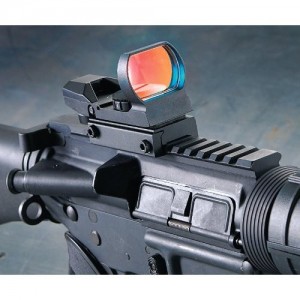 After the attaching comes the adjusting, just like with something that uses crosshairs.  People generally use red dot sights for more up close and personal situations, so they tend to use a bit less finesse when they sight it in.  But, even so, just slapping it on the gun and then trying to use it is a recipe for failure.  If you don’t make sure it is set up correctly, the bullet won’t land where you want. 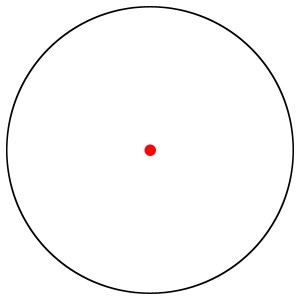 A company has been sending me unsolicited emails the past few weeks, announcing that they are accepting pre-orders for a new firearm accessory.  Called an Inteliscope, it seems to be nothing more than a mount so you can attach your smart phone to a rifle. 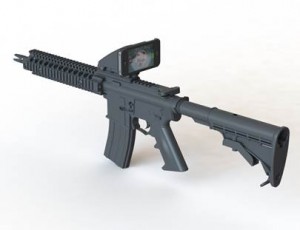 An app for the phone will activate the camera, and paint a very large red circle on the screen. 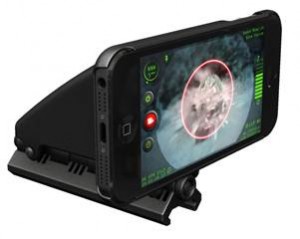 The idea is that the bullet will strike somewhere inside of that huge red circle.  Maybe.  If you are lucky.  I suppose.

When you are done shooting, the phone is easily removed so that it can be employed for the purpose for which it was originally designed.

The manufacturer claims that the mount was originally used to train police, which I find a bit odd.  (Impart and hone useful skills how, exactly?)  They also claim that the mount-and-phone makes an ideal toy, which is certainly something I can get behind.  Besides using a mount such as this to record paintball exploits for replay later, this YouTube video details how the device is useful when attached to extremely large toy guns that shoot foam darts.

But something that would actually be useful in a defensive situation?  Because, after all, the makers of this cell phone mount seem to be making that very claim.

END_OF_DOCUMENT_TOKEN_TO_BE_REPLACED

I was coming home around midnight, walking along the concrete path to my door, when I saw something lying in the way.  It was a gelid and wet mass of thick  translucent white cords, all aswim in a thick red goo.  It resembled nothing so much as a pile of hookworms, covered in blood. 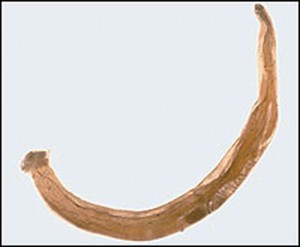 I do often count those who hail from third world countries as my neighbors, and it isn’t impossible that someone in the apartment complex brought some visitors with them when they entered the US.  If so, considering the amount of blood coating the pavement, they were in need of immediate medical attention!

But something just wasn’t right.  The hookworms in front of me were awfully big, much larger than the skinny strings that are the usual size for the beasts.  Another concern was that the blood loss must have been considerable, so much that I doubt anyone could have walked away after ejecting the mass.  As there was no body supine in the grass, then the poor soul must have been carted away by ambulance.  If that had happened, though, then why would someone leave the worms alone instead of cleaning them up?

I ripped a branch from a nearby bush and stirred the loathsome stew, looking to see if any of the worms writhed at the woody touch.  They were dead, lifeless, quiet.  And then the smell drifted into my nose and I realized that the puzzling pile was not made from blood and hookworms, but onion rings and ketchup!

END_OF_DOCUMENT_TOKEN_TO_BE_REPLACED

The Phantom is a comic book superhero who got his start as a daily strip in the newspapers. 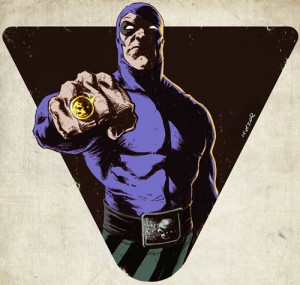 His right hand sports a ring with a skull emblem.  Villains who receive a right cross to the jaw from The Phantom will forever be marked with a skull shaped scar, a visible reminder to all that they are an evil criminal.

This sprang to mind when I ran across the following on my Internet wanderings. 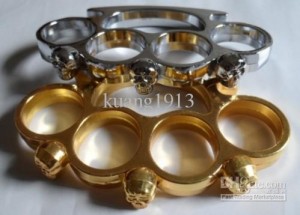 Brass knuckles that sport three little skulls along the striking edge.  Anyone unlucky enough to be on the receiving end would look like The Phantom really, really didn’t like them!

How much would such shiny engines of destruction cost?  Surprisingly little, which indicates to me that they are rather shoddily made.

As has been pointed out by knirirr and others, there are some questions as to the effectiveness of knuckledusters as hand-to-hand defensive devices.  There certainly are questions as to their legality, as ownership and carrying of brass knuckles is banned in various municipalities, states, and even entire countries.  Don’t even think of ordering unless you are sure that you will not be breaking any laws!

So far as I am concerned, I have no intention of using the devices for their intended purpose.  Purchasing a pair would be nothing more than a waste of money.

But they are so gaudy, so gauche, so irredeemably flashy like a twenty dollar whore.  They draw the eye like a dangling key ring draws the attention of a toddler!  Added to this is the allure that they are, indeed, banned by law in so many places.  I desire to own a set just in case they are made illegal in my neck of the woods some time in the future.

A purely American response, I am sure. 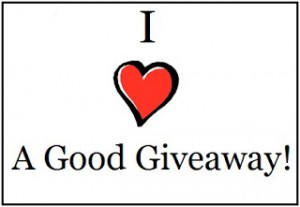 Aaron Spuler has, once again, provided a great service for those involved in the shooting sports.  He has collected information and links to the major contests where gear and guns are given away by manufacturers and retailers.

Many will enter, and few will win.  Don’t be disappointed or discouraged if you don’t hit the jackpot.  Just keep checking back on Aaron’s blog every month for the latest list, and try again.

A program based in Houston, Texas is giving free firearms training to people in high crime areas.  As you might imagine, I approve!

But they also go one step further, as they also provide free shotguns to their students.

I approve, of course.  The usual suspects are nay-saying the program.  They claim that putting more guns in the hands of peaceful, law abiding citizens will increase crime instead of causing it to decrease.  They are wrong, of course.

I never did that myself, the providing guns bit.  Free training, free ammo, sure.  But there never was enough cash in the kitty to help everyone who asked for my assistance.  There would have been an even larger number of people to turn away if I purchased forearms for my students.

Besides, the liability concerns are significant.  No matter how many waivers and contracts I would have them sign, there would certainly be the very real danger that some criminal, or the family of a deceased criminal, would sue me the moment the n’er-do-well was stopped by one of my students wielding a gun that had previously belonged to myself.

I have little doubt that Texas is a very different legal environment than my home state of Ohio.  But, even so, I hope they have some very deep pockets.