This news article from 2011 claims that a fully equipped police utility belt weighs up to 40 lbs. 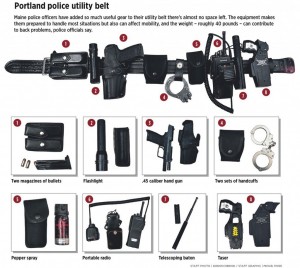 So how much does a full suit of plate armor weigh without the helmet?  About the same.

A long-time reader was kind enough to send me a link to this news video.  (Thank you kindly, Greg!)

The short CNN segment reports on a device offered by Alternative Ballistics.  It consists of a mounting bracket that fits over a handgun, and a ball which sits in front of the muzzle. 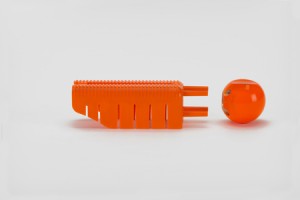 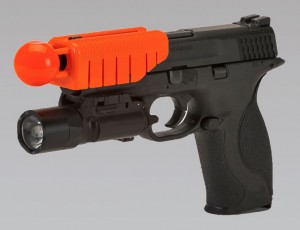 The idea is that a bullet will clear the barrel, only to slam into the base of the ball.  This causes the ball to fly downrange, striking a violent criminal with less lethal force. 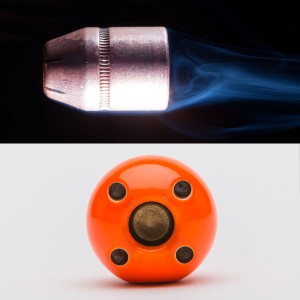 It reminds me of bean bag rounds used in shotguns. 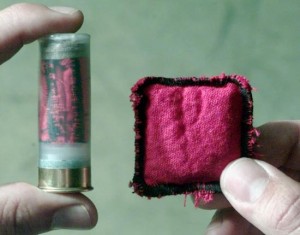 Increase the surface area of the projectile to try and prevent penetration, and hope that it still has enough energy to discourage the bad guys when it strikes the target.

So we have a new way to turn a handgun into a less-lethal impact weapon.  Would it work?  Yeah, probably.  Don’t see any reason why it wouldn’t, although I would be worried that it would interfere with the slide and cause the gun to jam.

But that isn’t the main issue.  The very first thing that popped into my mind was “So what is wrong with all the other less-lethal options modern police officers haul around with them?”

END_OF_DOCUMENT_TOKEN_TO_BE_REPLACED 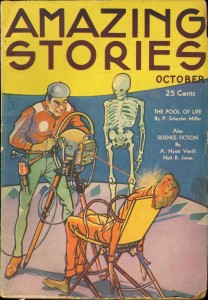 Why is that guy wearing a breast implant for a hat? 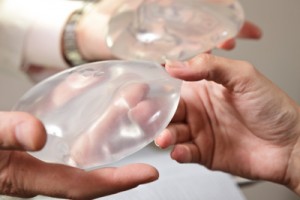 See?  Can’t be anything else! 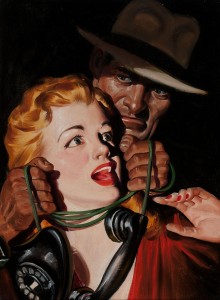 Dammit, will you get off the phone already? 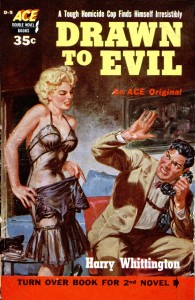 For Pete’s sake, woman!  Can’t you see that now I’m on the phone? 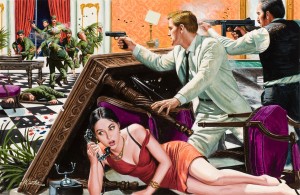 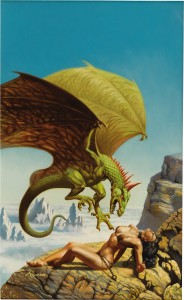 Seems that Saddam Hussein had a copy of this painting hanging on his wall. 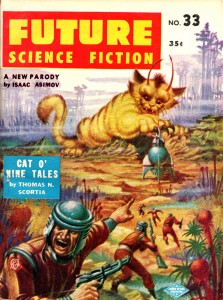 This is for all you cat lovers out there.

All of these came from the excellent site Pulp Covers.  As many of the magazines and pulp novels featured are in the public domain, links are provided so you can download those available for free.

Read a few of the novels and stories, however, and you will discover that most of the cover art is far more interesting than the tale. 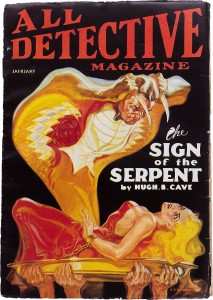 Columbus, Ohio is like most college towns in that there is a high population density near the campus area. 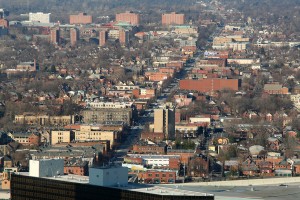 Lots of rental property, and lots of businesses to cater to the students.  Restaurants, bars, clothing stores, video game and music stores.  Things like that.  Everything is jammed together so closely that it is possible to walk everywhere you need to be.

Dan worked as a waiter in on of those restaurants.  After the eatery closed its doors, he liked to stop in for a few hours at a bar along the way home.  He made good tips, but spent whatever was in his pocket every night. 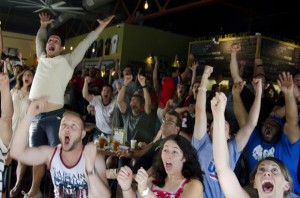 One evening he downed a few too many.  Four guys offered to walk him home in order to make sure he “… got there safe.”  He thought nothing of it because he had been drinking with the same fellows off and on for the past few weeks, and he knew all of their first names if not their last.  The erosion of sound judgement that comes from too much strong drink was on full display.

When the group arrived at Dan’s rented duplex, the four almost-strangers forced him inside and beat him up enough to ensure passivity. They ransacked the place, but became enraged when they found that there weren’t piles of cash lying about for them to steal.  Burglary and simple assault turned into rape.

Yes, men do get raped.  My experiences have convinced me that it is a far more common crime than anyone realizes, just as I am convinced that it is extremely difficult for male victims of the crime to report their experience to the police.  All of the support for rape victims, either cultural of institutional, is designed to help female victims.  Males often feel stigmatized and alone.

To his great good credit, Dan went to the police.  All of his attackers were arrested, and they were sentenced to lengthy jail terms.

A happy ending?  Well, not exactly.