(WARNING : I am not a lawyer.  I have no idea if any of the devices or products discussed below are legal where you live.  To find out, hire a real lawyer and ask.)

I think it was in the early 1980’s when I first heard of a conversion kit available for the Ruger 10/22, a semi-auto rifle chambered for the .22 Long Rifle cartridge.

All one had to do was take the stocks off of two of the rifles, attach the after market parts, and the result was an engine of destruction that was a sight to behold! 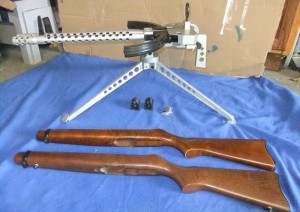 The kit turned your two rifles into a hand cranked Gatling gun.  Still legal in most places in the United States since the guns were nothing more than semi-auto, while turning the crank caused the triggers to be repeatedly massaged.

What did I think?  Considering the underpowered round used, I figured the .22 Gatling was just the thing if I ever had to defend a static position against hordes of rampaging squirrels. 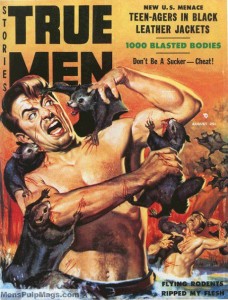 I wasn’t that impressed, although it would make a neat toy if I ever got rich enough to spend money on stuff that didn’t have a clear use.  But then I heard of even more gimmicks to get your rifle to mimic a machine gun.

I think most of you know the proper way to hold a rifle.  The stock is seated firmly on the shoulder, with the forward hand pressing the rifle back into the body to increase stability.  The trigger is squeezed by the index finger of the non-supporting hand. 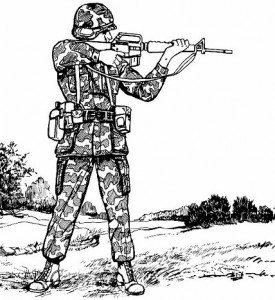 Someone got the bright idea to avoid squeezing the trigger, and instead have the finger which usually does that job curl into a hook.  The supporting hand would then push the rifle forward, towards the target, until the trigger bumped into the finger and the rifle was fired.

I know I am not explaining this very well.  Here is a video where some guys use common office rubber bands to help them rip off their magazines in an amazingly short period of time.  I hope that makes the whole process  more clear.

This process is known as “bump firing“, and I pretty much had the same thoughts about this method as I did about the Gatling 10/22.  Neat to do once or twice, but of very limited use in the real world.

Milo was kind enough to send me this link, which shows someone using a bump stock.  This is an aftermarket stock one can attach to a number of standard semi-auto rifles in order to bump fire them more easily.  It seems the days of using a rubber band one pilfered at work are long gone.

So how do these stocks work, and do they actually perform as advertised?  I can’t answer either question with any degree of authority, since I have never used one.  But this video is pretty good at showing what is going on, and they have a side-by-side test with an actual legal full auto rifle.  Worth a look.

One of my major frustrations with the majority of my students s the high regard they hold for handguns, and the lack of interest they displayed for long guns.

Oh, don’t get me wrong.  There are plenty of good things I can say about handguns.  The only problem is that comparable long guns are much, much more powerful than their handgun counterparts.  Handguns are the perfect size for go anywhere emergency defense tools.  A carefully chosen long gun is perfect for just about everything else.

But why would that be?  How much more powerful are long guns when compared to handguns, anyway?

To illustrate what I mean, let us take a look at the main US infantry battle arms for both World Wars and Korea.  These were the M1 Garand rifle, and the M1911 handgun. 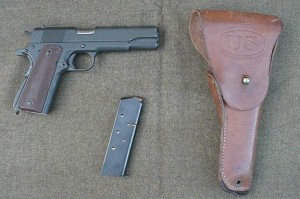 There are a great many factors that contribute to the effectiveness of firearms, of course, just as there are a great many loads available for every popular cartridge which changes the performance of the gun.  But comparing muzzle energy is a fairly reliable quick-and-dirty method, and it is very clear that this particular long gun far outclasses that handgun.

Okay, so what about the present day?  New weapons have replaced the old and boring guns that are pictured above.  What are the standard infantry weapons of today, and how do they stack up?

END_OF_DOCUMENT_TOKEN_TO_BE_REPLACED 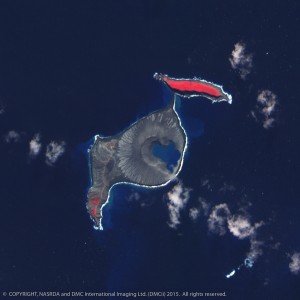 That looks familiar.  What does it remind me of ….?

END_OF_DOCUMENT_TOKEN_TO_BE_REPLACED

Those of us interested in law enforcement issues have been following the story of a fake police force centered in California with interest.  The story raises some questions I don’t think anyone has asked.

The details are that Brandon Kiel, an aide to the Attorney General of California, was arrested for parading around in a police uniform.  This isn’t a crime in and of itself. 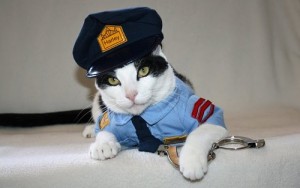 The crime was committed when he presented himself as the member of a fictional law enforcement agency, passing out business cards and directing people to a website.  It seems the guy also used his work documentation, which identified Kiel as an employee of the California Department of Justice, in a fraudulent manner.

At least he didn’t claim to be the boss.  That honor was reserved for David Henry, a guy who said he was the chief.  It seems that he was so proud of his exalted position in the fake law enforcement agency that would take his kids out for dinner two or three times a week at a local restaurant while wearing a police uniform.  The people who encountered him while he strutted around with his gun and badge said that he insisted he was a real, honest to God, not fake police chief.

Okay, so we have a number of people with rather bizarre delusions that were arrested.  But I am really interested in what the actual cops found when they searched the homes of these freaks.

According to news reports, the usual props were collected when the search warrants were executed.  Guns, badges, ID laminates, business cards, uniforms.  But they also mention that the police seized ” …police-type vehicles…” while conducting their investigation.

Okay, hold on a minute.  Guns and uniforms and the rest can be had for maybe a thousand dollars per person, but they also had police cruisers?  More than one, since the news reports “vehicles” with an “S”? 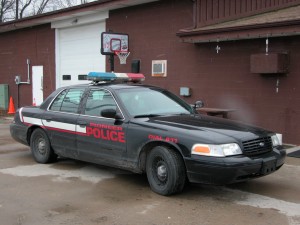 Where in the world did they get the money for that?  Even if they bought a few junker cars and fixed them up, we are talking a serious investment.  Who coughed up the dough?

It seems that a few of the people involved in the conspiracy owned a security company, now defunct, which focused on guarding property owned by Freemason lodges.  Maybe the police type vehicles are cars used by the firm when it was a going concern.

Even so, I would like to know how these guys financed their little trip into cloud cuckoo land.

The Silk Road was an online black market exchange, most famous for using bitcoins as a way to pay for illegal goods and services.  The US government, amongst others, investigated and shut down the site.  Several arrests have been made around the world, and a fair number of people have been convicted of illegal activity that they conducted while Silk Road was still operating.

One of the strangest aspects of the case is the involvement of Carl Mark Force IV, a DEA agent tasked with investigating Silk Road.  It seems the lure of easy and supposedly untraceable money was too much for him, and he attempted to rake some of it in.  He set up  few accounts in order to hijack the accounts of others, trusting in the anonymous nature of bitcoin to hide his identity.  Using his authority as a government law enforcement official, he froze bank accounts of suspects in order to transfer some of the money to himself.  Apparently he even sold details of the official investigation to the people he was tasked with investigating, an egregious violation of trust if true.

This online article provides a brief thumbnail of the twists and turns of the story, and is worth the time to read.  But what I found odd is how the author seems to think that the most important aspect of the tale is that the DEA agent had firearms at home when arrested!

The rogue agent had a 9mm handgun in his possession, as well as four other firearms scattered about his home.  It also appears to be shocking (SHOCKING!) that there was also 650 rounds of ammunition stored at the house.

So the prosecutors are in a tizzy because of 650 rounds.  You know what I call that?  A good day at the range!

I hope I never get falsely arrested for crimes I would never commit.  They would probably give me life for the supply of .22 ammunition I have on the bookshelf, let alone the 9mm rounds stacked next to the desk.

Two gumen in a car attempted to kill a security guard outside of a contest for the best Mohammad cartoon.  Police were already on the scene for added security, and they killed the gunmen on the spot.

The guard was injured but is expected to survive.  I wish them a speedy recovery, and my prayers are with them and their family.

What is the score?  Leaving the world no poorer, two examples of human filth are erased from existence.  One decent person is shot, which is extremely sad, but they should live to tell the tale.

The thing that strikes me as insane is that the contest was being held in Texas!  What were the violent criminals thinking?  How far did they think they would get, anyway?

I think Charlie Hebdo should relocate from Paris to Dallas.

Steven has some important background.