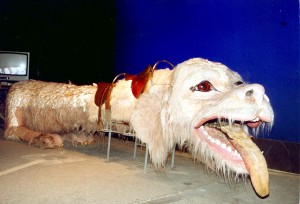 In a previous post, there was a question about how bullet shape increases stability.

This prompted long time reader Fruitbat44 to ask a question …

“So that’s why you get target shooters loading wadcutters?”

Okay, let us sort out the issues at hand.  What are these “wadcutters” of which Fruitbat44 speaks?

The answer is that they are bullets that are very flat at the front. 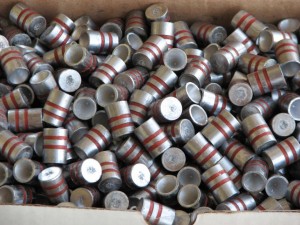 What is the hollow you see in some of them?  Wadcutters may have a little cup shape scooped out of the back so the expanding gas from the propellent will cause the sides to swell out in order to engage the rifling in the barrel, but the front is kind of like a physical map of Kansas. 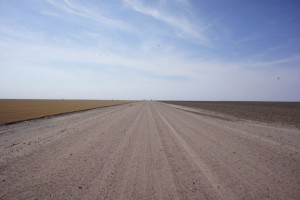 Cartridges loaded with wadcutters have a very distinct look about them. 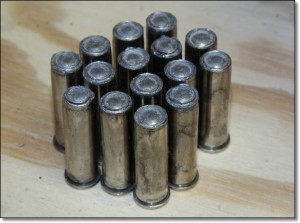 Okay, so we have handgun bullets that are flat flat flat.  So what?  Why use them?

The answer is provided by knirirr, yet another long time reader …

“I always thought that it was because they punched nice neat holes in the target which make it easier to score; the wadcutters I have certainly do that (they are flat at both ends).”

That is exactly true, as the flat face of the bullet will punch out extremely neat holes when it strikes a paper target. 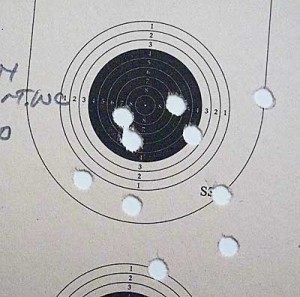 Compare this to the ragged and indistinct impressions left behind when a traditional pointed bullet passes through a paper target. 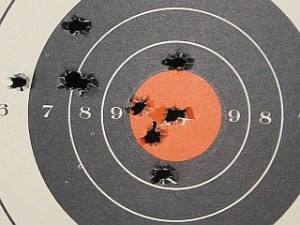 Wadcutters are thus most popular amongst serious handgun target shooters, as the clean holes punched out of the target allows for much easier and more precise scoring.  Is that hole to be scored as an 8, or merely a 7?  Wadcutters take a lot of the anxiety out of judging bullseye target competitions.

So that is why modern day shooters might have a few hundred cartridges loaded with wadcutters in the gun safe.  But a dim memory prompted Fruitbat44 to make an observation …

“… I dimly record reading about some handloaders using wadcutters for self-defence load.”

It is true that there was such advice floating around at one time, but to explore that I think it would be best to take a brief history lesson.

END_OF_DOCUMENT_TOKEN_TO_BE_REPLACED

In my recent wanderings amongst the internets, I came across a number of blog posts and videos on YouTube from people who wanted to discuss their visits to the United States.  The majority were quick to point out that they thought the US was a wonderful and interesting place, but that there were plenty of things about the country that confused them utterly. 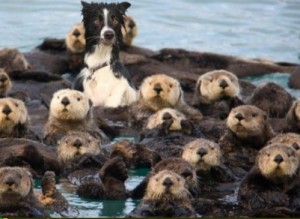 Lucky for all involved, I am here to cut through the puzzlement.   But to get it all straight, you have to go back to the beginning when Europeans arrived.

AMERICA WAS COLONIZED BY YEOMAN FARMERS

Yeoman farmers?  Who are these guys?

The word “yeoman” has a fair number of meanings, but in this context it refers to people who own their own land.  Click here to get a definition.

“Yeoman farmers are those who owned their own piece of land and worked it with labor from family, …” (break)  “They were also seen as the ideal Americans because they were hardworking virtuous citizens who did their work without exploiting others.“ 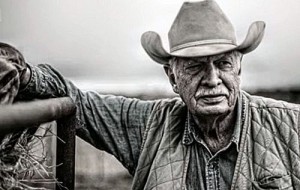 That is only half the story.  In times of old the English crown would recruit archers from the yeoman class as part of their armies, their archery skills self-taught and honed for hunting and defending the home. 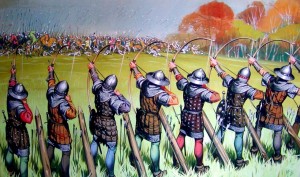 When the enemy knights would charge, these archers would stand their ground in the face of highly trained and armored warriors that had spent their entire lives getting ready to kill other people.  The farmers would do this so the could shoot pointy little sticks at the galloping warhorses, each horse weighing over half a ton, and try to bring the enemy down before being stomped into goo under the thundering hooves.

So the bedrock of the American character is work hard, deal fairly, and take no shit.

THE CENTERS OF GOVERNMENT ARE IN INCONVENIENT PLACES

This is a map of the great state of New York. 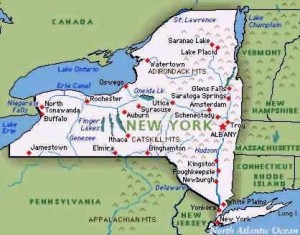 The city of New York was more populous and richer than anywhere else when the state was formed, but a backwater village named Albany was eventually chosen to be the seat of government.  This was in the hope of keeping the dirty, money grubbing merchants living in New York City from dominating the democratic process.  Didn’t work, but it was a valiant effort nonetheless.

This wasn’t a mistake, and the pattern is repeated time and again across the nation.  Here is a map of my home state of Ohio. 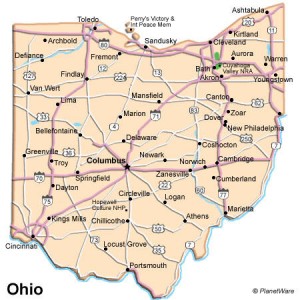 The port city Cincinnati was already established when the state was formed in 1803, but it wasn’t even considered to be the seat of government.  It was eventually decided to make a new capital city from scratch in the center of the state, but that decision wasn’t made in order to make things convenient for anyone.  Instead the idea was to make it equally inconvenient for everyone involved, in the hope that the new government would be discouraged from meddling in the day-to-day lives of the voters.  This worked about as well as it did in New York, but at least they had the right idea.

When the country was being set up, it was heavily influenced by a bunch of strong willed citizens whose main desire was to be left alone.  The yeoman farmer knows his plot of land better than anyone else on Earth, they know the best way to manage their affairs, and anyone who says otherwise should just go away and leave them in peace.

THE MEALS ARE ENORMOUS

Anyone who says that has never worked on a farm.

END_OF_DOCUMENT_TOKEN_TO_BE_REPLACED

Some time ago, I posted an essay concerning how bullets fired from derringers can tumble in flight.

Long time reader Fruitbat44 left a comment that has been nagging at me.

“Please correct me if I’m wrong, but I always thought that a bullet that tumbled would do more damage to an attacker than one which didn’t.”

What Fruitbat44 is referring to is a claim made during the vicious and heated debate that ensued when the US military started to replace their front line battle rifles with the M16. 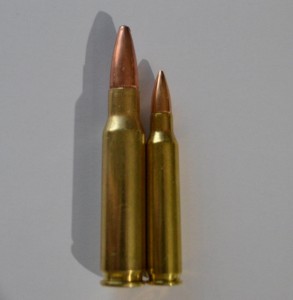 The reaction of most people who had been in combat was swift and decisive.

HOLD THE PHONE!  The US military, in the middle of a war, was going to replace a proven and battle-tested rifle with one that was weaker?  Who the hell thought this one up?  THEY WERE SENDING OUR GUYS OUT TO DIE!

Not so, proponents of the new rifle said.  The new ammunition was designed to tumble, dontchya know.  It didn’t matter that it was smaller and weaker than the old ammo, because it produced even bigger wounds!  The tumbling bullets chewed through a human body like a buzzsaw meeting a damsel! 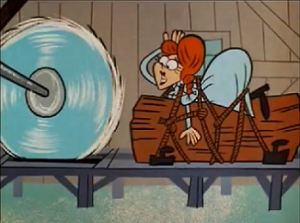 There is also no doubt that 5.56 rounds produce some impressive wounds for their size.

So the bullet from an AR design tumbles while it flies through the air?  Actually, no.  It flies straight and true in the air like any accurate round, but tries to swap ends when it enters something soft and squishy like a human body.  When the bullet turns sideways, the stresses produced tend to break up the round.  It is very common for 5.56 rounds to fragment into at least a few fragments.

So why does the bullet do this?  Have no idea, actually.  Depends on who you talk to.  Some people say it is due to the shape of the bullet, others say it is the way the bullet is balanced, and still others say that every bullet does this and the 5.56 is no different.  I’m just pretty sure that it does.

If anyone has the inside scoop, please share in the comments.  I’m going to go to the range and fire a few rounds.