I have just found out that Steven den Beste has left us.  A massive intellect coupled with an even larger heart, I will miss him sorely. 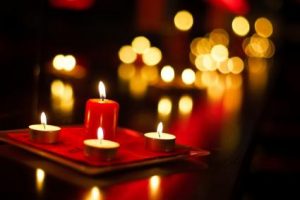 In 1965, a James Bond film was released with the title Thunderball. 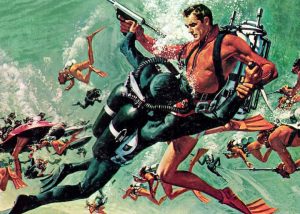 This was the fourth film featuring the MI6 superspy, and the number of gadgets and high tech equipment used by Bond had been growing in number and sophistication ever since his first movie in 1962.  With Thunderball, all caution was thrown to the winds.  If it could be depicted on screen, then the producers and director gleefully worked it into the script.

Although I could type away at this keyboard for hours in an attempt to give the lowdown on the neato gear on display, I would like to narrow things down a bit and mention the climactic underwater battle in the third act.  It occurred between SPECTRE, the world spanning terrorist-for-hire criminal organization Bond often had to tangle with, and a brand new branch of the US Navy known as the SEALS.  As the SEALS had only been created two years before, in 1962, this presented a way to gain much needed positive press.

All kinds of underwater weaponry was on display, from propeller driven scooters to spear guns to waterproof grenades.  If you haven’t seen this film, and you are a fan of action movies, you need to go rent a copy forthwith.

The SEALS may have participated in a movie depicting fictional British spies and an equally fictional organization bent on blackmailing world governments with stolen nuclear weapons, but the all too real Soviet Union was well aware that they suffered a serious vulnerability when it came to guarding against sabotage conducted with underwater demolitions.  The only weapon they had to equip their own frogmen for undersea protection was a simple knife, which they judged as being completely inadequate to fend off the expected horde of SEALs that were sure to appear if the Cold War ever turned hot.  With this in mind, Communist weapon designers turned their efforts towards developing underwater firearms.