A little something to carve the turkey. 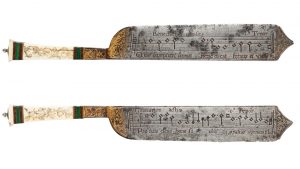 A notation knife, with music and song etched into the blade, circa 1500 CE or so.  One side contains the grace, while the other side has a song of thanks.

The knife pictured above is housed at the Victoria and Albert Museum in the great city of London.  Click this link to be taken to the V&A website page that talks about the knife.  You can even listen to modern reproductions of the songs, kind of like listening to an echo from half millennium ago.

I have a special tradition for this holiday.  I always have a good dinner, as most everyone does, but I also watch Dredd (2012).

A dystopian crime drama, soaked with violence and despair, instead of a feel-good film that uplifts the spirit?  There are a few reasons for this.

I worked two jobs during the 1980’s, and would rent videos for the few days I had any free time.  There were many nights I would watch cheap movies featuring forgettable action heroes that were filmed on a shoestring.  Although Dredd had a respectable amount of money in the budget, and it looks pretty good, the gritty and hyper-realistic tone of the film reminds me strongly of all of those direct to video offerings where everyone involved tried to do their best with what they had.

Another reason is that it is a pretty good film!  Entertaining, and the characters are true to the source material.  None of which can be said of the first effort to bring the character to the big screen.

The last reason is that I am really, really thankful that I don’t live in such a world as that depicted in the movie.  And isn’t giving thanks what the holiday is all about?

Fascinating story about a crazy cat lady who likes to mail bombs to the Texas governor and President Obama. (Hat tip to Glenn.) 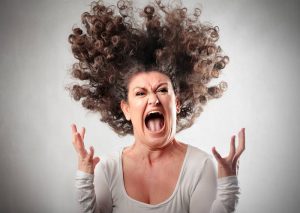 Click that first link above and fill your eyeholes with crazy.

Julia Poff has had a very hard life.

She was fired from her job at a law firm, but they fired her for stealing money from a client.  She set up a fund where kind-hearted people could donate clothing and money to a widowed father and young child after Hurricane Harvey, and she kept the money for herself.  She was denied assistance through SNAP, the Federal program that replaced the old food stamps, but only because she lied to them about her financial circumstance.  She has been evicted from her residence seven times in the past for non-payment of rent.  This pissed her off so much that she poured liquid concrete down the drains, stuffed the toilets with potatoes so they couldn’t flush, and locked her dogs inside and refused to let them out so they would piss and crap all over the place. 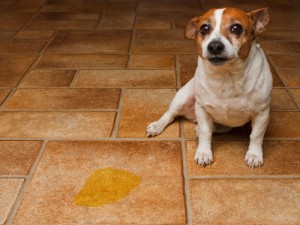 Bankruptcy court has repeatedly denied her requests to have her debts discharged, but only because she lied to them the same way she lied to SNAP.  It appears that she was so hostile during the court proceedings that extra security was on hand whenever she was scheduled to appear at the court house.  She is in trouble with the IRS, but only because she has not reported income.  She has been convicted of misdemeanor theft and state felony fraud, both times receiving probation instead of jail time, but has refused to abide by the terms of the probation so it has been either revoked or amended.  Her application for Social Security benefits, probably disability benefits because they are easiest to get, was denied because she didn’t qualify for them.

But the real kicker is that she is being investigated by the FBI.  Why?  Because in 2016 she mailed bombs to President Obama, a Social Security administration building in Maryland, and Texas state governor Greg Abbott. 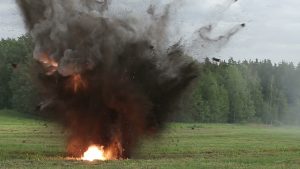 The Feds are pretty good about security, and their screening procedures intercepted the bombs before anyone was hurt.  But Governor Abbott opens his own mail, or at least he did.  He only managed to escape serious injury and possible death from the package bomb because he “did not open it as designed“, which probably means he used a knife to cut the package open on the side instead of the ends.  Something tells me there is  a recently installed X-ray machine in the Governor’s mansion!

How did they catch her?  What evidence is there that Ms. Poff is the terrorist who mailed these bombs in an attempt to take innocent lives?

Well, they found cat hair stuck under labels of the packages sent to both Governor Abbott and President Obama, and the cat hair matches samples taken from cats owned by Ms. Poff.  She seems to be a crazy cat lady who also keeps a few dogs on hand in case she needs to soak down her apartment with extra urine and feces. 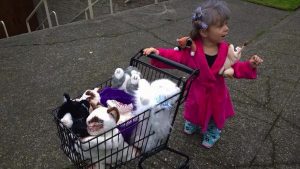 A cell phone was used as an ignition device in the bomb sent to President Obama, and the cell phone belongs to Ms. Poff.  I suppose she figured it would be blown up real good, and the FBI crime lab would never be able to trace it back to her! 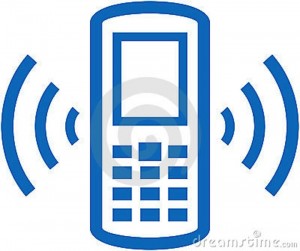 The cardboard box that contained the bomb mailed to Governor Abbott had an older mailing label still affixed, a mailing label that was addressed to Ms. Poff.  She never thought anyone would be able to trace it back to her because she had used a permanent marker to color over the name and address! 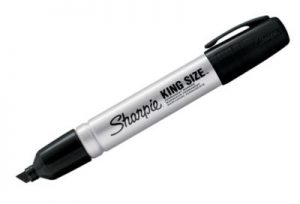 What a criminal mastermind we have here!

She is currently 46 years old.  I’m pretty sure that she is going to be a guest of the grey bar hotel for a few decades.  If she is lucky, her public defender will be willing to take the extra effort to have her remanded to a mental institution to serve out her sentence.  Because, let’s face it, she might not qualify for Social Security benefits, but she certainly qualifies for that! 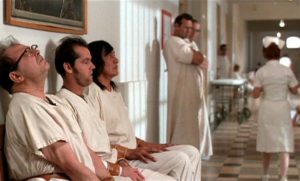 I said before that Ms. Poff has had a hard life.  One of the things I didn’t bother to mention earlier is that all of her woes is entirely her fault!

Ever hear of chain shot? 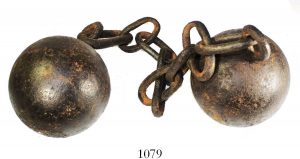 Clearly, it is a couple of cannon balls connected by a chain.  I mean, DUH!

It was used mainly during the great Age of Sail. 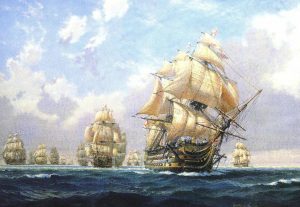 The idea was to load that bad boy in a cannon, and use it to chop up the rigging.  It would act as a giant buzzsaw, ripping through sails, masts and ropes.

It also did a pretty good job against enemy combatants.

The problem was that cannons, like any gun, can only be loaded with so much propellant before going kaboom.  Double cannon balls, with a length of chain, would be moving significantly slower when fired than a single cannon ball.  This meant that the range was severely curtailed, and one would have to get really, really close to some extremely angry strangers before letting loose with the noisy balm that was sure to calm them down.

A long time reader sent me a link to an interesting site that discusses a rather curios cannon.  (Hi, Greg!)  It seems that a double barrelled cannon is on display in Athens, Georgia that was designed to fire chain shot. 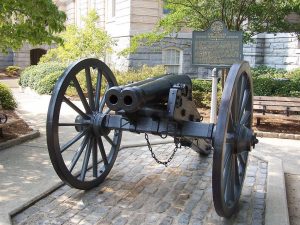 One cannon ball per barrel, and the muzzle velocity will be nice and high.  No reduction in potential range as long as the chain or balls don’t hit anything prematurely.

The cannon pictured above was made in 1862, but it was hardly a new idea at the time.  I came across another existing example that was sold at auction in 2015 which dated from 1848. 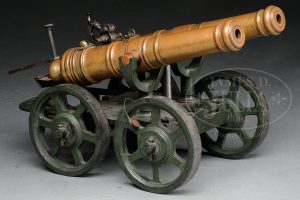 Pretty interesting stuff!  Click on some links, the text isn’t very long, probably because such cannon didn’t play a very significant role in warfare.  And let me give a note of thanks to Greg for the heads up!

I have an interest in history.  Not so much HISTORY!, the really huge trends and events that change the human conditions on a global scale.  Instead I like the small stuff, the nitty gritty, individuals down in the dirt getting their hands dirty to make things happen.

Considering the nature of this blog, I would like to bring your attention to a video blog called C@Rsenal (pronounced “See-Arsenal”).  It is exhaustively researched, not only tracing the evolution of gun design but also presenting the human side of things.  As there is money to be made in firearms, like there is in any other mechanical tool that may see widespread use, the people involved in designing and marketing the devices tend to have some rather dramatic personality clashes.

Case in point is the episode where the Lewis gun is discussed.

For those of you who are not familiar with the design, the Lewis gun is considered by many to be the very best British light machine gun that was used in the first World War.  In fact, it is probably the very best light machine gun used in that war, British or otherwise.  So why did a gun that was developed by extremely patriotic Americans used extensively by the British, and almost completely ignored by the American government?  For that you will have to watch the video.

The first thing you will note is the length of the video.  Close to an hour and a half!  There are movies that aren’t as long!

Well, like I said, it is chock full of detail.  If you find the subject to be interesting, then you are someone who will appreciate the effort made to ferret out all of the details, and bring them to us.  If this just seems boring to you, and I don’t blame anyone who might have that opinion, then please skip the videos for fare that you will find more rewarding.

The episode on the Lewis gun is particularly lengthy, and most of the videos at C@Rsenal are about half the running time.  The authors of the channel are concentrating on arms used during WWI, and it is great resource if you are interested in building a collection of historical arms from that period.

James says check it out!

If you should find yourself out of insecticide and your home is assailed by bees ….

… then you should know that Formula 409 drops them like a bullet to the head! 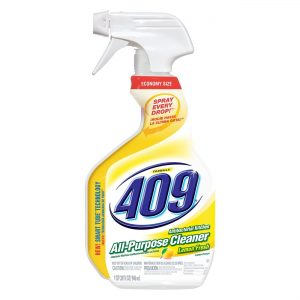