Below is the trailer for the 1973 movie Serpico, and it has a line or two about a gun that the main character is buying.

The gun that the hero hippy cop was buying was a Browning Hi Power, and the guy doing the selling certainly seems to be impressed the firepower it commands.

Not exactly accurate.  The magazine at the time held 13 rounds of 9mm Parabellum, with one in the chamber.  Fourteen total, not 14 in the magazine. 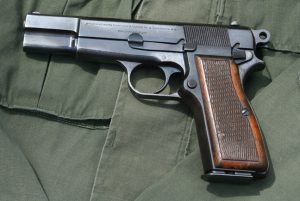 Still, consider the times.  Police forces at the time were wedded to revolvers, six rounds in the cylinder and then one had to go through a long reloading process.  To most Americans in the 1960’s and 1970’s, the only autoloaders that existed in their minds were 1911‘s.  Seven round magazines, and then you were out.  The Hi Power must have seemed like a monster on steroids. 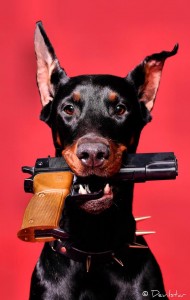 Originally designed by famed firearms inventor John Moses Browning, the same guy who invented the aforementioned 1911, the Hi Power was not put into production until 1935, nine years after his death.  It was the most advanced production handgun on the planet at that time, and for decades afterwards, and just about every military wanted something like the Hi Power.

People discussing the merits of the Hi Power like to say that at least 50 armies across the world adopted the gun as their primary sidearm, and that is certainly true.  But what is usually not mentioned is how the design was essentially stolen by at least a few countries.

Make an internal change or two and claim that it is a completely different design entirely.  The Warsaw Pact countries are famous for this, with Hungary being the one that spent the least effort to cover their tracks.  Canada looked to the Hi Power when they were thinking of developing a Magnum autoloader for their military, simply making the design larger and more robust to handle the massive stress caused by firing an incredibly powerful round. Such piracy of the design is a sure sign of how iconic and useful it has been through the years.

Alas, all things must come to an end.  The Browning website states that Hi Power production has ceased.  The guns waiting to be sold will last for some time to come, and the massive numbers already out in the world, will mean that examples of the gun will not become scarce for the rest of my life.  Still, I can’t help becoming a bit maudlin when I consider the end of such a favored warhorse.

Did any of you see this?

Tina Ring and her daughter Ashley Lee make a living for their families through their liquor store in Tulsa, Oklahoma.  A masked robber, armed with a shotgun, threatens their lives and takes the cash in the till before exiting the building.

He has what he said he wanted, but he comes back.  Why?  He had just robbed two helpless women, leaving them unmolested.  Maybe he had second thoughts about that second part.

We don’t have much information except the video, and some of the action takes place off camera.  Tina the mom arms herself with a revolver, don’t know what make or model, but I would guess something chambered for the .38 Special cartridge.  Daughter Ashley favors an autoloader, probably chambered for the .380 ACP cartridge.  If this is what they are using, and I have no way to know if it is, then they are both perfectly adequate rounds for self defense.

The end of the video is particularly terrifying.  The robber returns, wrestles the gun from Tina, and tries to shoot Ashley.  Why didn’t the gun go off?  I think Tina expended a round or two off camera.  Something tells me the gun was empty, the hammer falling on spent cartridges.

So I’m someone who teaches people how to get through situations like this.  Do I have any thoughts?  Perhaps some critique of the actions of Tina and Ashley?