The first fully automatic firearm I ever put through it’s paces was an M3 Grease Gun. 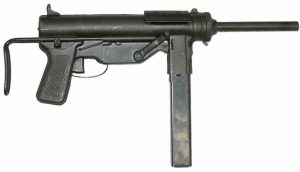 Found the pic at this truly excellent article about the firearm at Guns.com.  Click that mouse if you want the lowdown on the design.

How was it?  Amazing!  Slow rate of fire, easily controllable, just a blast to shoot.  Not particularly accurate, but it is a submachine gun!  And an old one at that!

What was my second full auto experience?  The same gentleman who owned the M3 stepped back from the shooting bench and let me try my hand with his Uzi.

Another old gun.  This one had been manufactured about 1960 or so, and had the wooden stock instead of the folding wire stock.  Don’t ask me where he had gotten his hands on it.

So how was it?  After the M3 it was kind of meh, actually.  Can’t really say why.  It was more accurate than the M3, significantly so, and had a faster cyclic rate.

Maybe that was why I wasn’t too keen.  The Uzi burned through the magazine faster, so I had less fun time before running out of gun food.

7 thoughts on ““What Was It Like Shooting Full Auto For The First Time?””