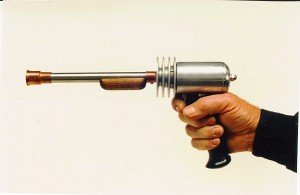 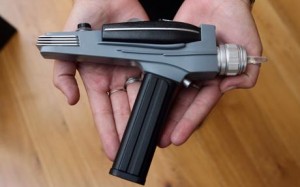 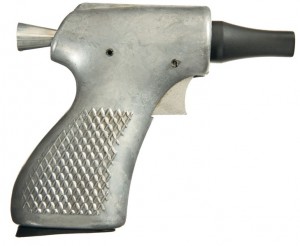 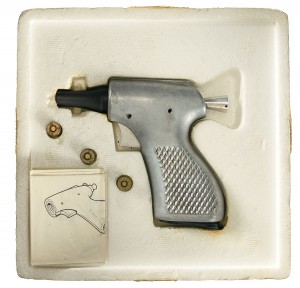 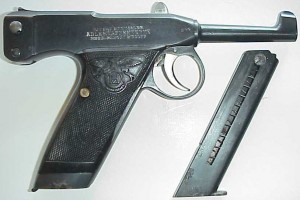 Patented in 1905 this gun was briefly manufactured by the German firm of Adlerwerke, a producer of bicycles, typewriters, automobiles, and eventually planes for the Nazis when that whole unpleasantness bloomed in that country.  This is their only foray into small arms of which I am aware.

The gun used a unique 7mm cartridge of bottle-neck design.  That odd fin sticking up on top of the gun over the trigger is the cocking lever, and was not used as part of the sights.  It functioned as a blowback, and the extended receiver that ran back towards the arm of the user was to accommodate a reciprocating bolt.

The Adler did not inflame the passions of the gun buying public, and the production run ended after less than 100 were made.  This website has more pictures, as well as a bit more information for the curios. 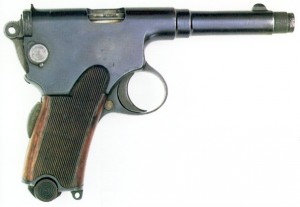 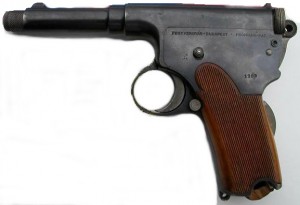 Hungarian weapon that found a home as a sidearm for the police, this gun was chambered for a .32 cartridge of disgustingly anemic performance.  Touted at the time as being the safest handgun in the world due to the inclusion of a grip safety.  For some reason, the guy writing the ads about how safe the gun was missed the fact that anyone shot by this underpowered handgun was very unlikely to die from the wounds inflicted.

How poor was the performance?  The .32 Roth cartridge has decidedly less impressive than most loadings for the .22 Long Rifle cartridge.  I would not want to be a cop trying to face down a desperate criminal with only a Frommer at hand. 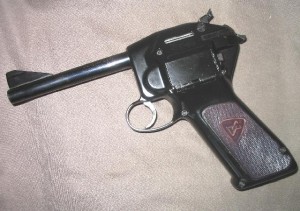 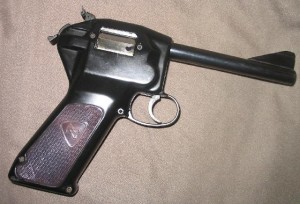 A curious attempt to design a revolver that fed from a magazine, the gun was first introduced in the 1950’s.  Standard cartridges would not work, which led to the development of triangular ammunition.  These were called “trounds”, and plastic adapters were available so round ammo could be adopted to the system. 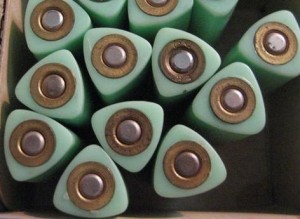 Some people thought this was a neato idea, but it never took off due to the fact that traditional revolvers and autoloaders worked just fine all by themselves.  As the Dardick did not offer any concrete advantages, and was a great deal more expensive as well, the few remaining are collectors items.

What are the elements which suggest a science fiction raygun?  They are completely subjective.  That is why I know not everyone will agree with my list, and many people will have suggestions for guns that I missed.  If so, please leave a word in the comments section.